The Bond Bike: Cycling for Badasses

One way you can be a little more like this super agent someday (if you have the right connections) is with a “Bond bike.” 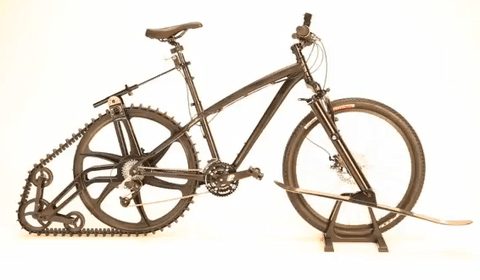 This is not actually a new bike but a kit to use on your existing bike that will give it the cool ability to easily ride on snow, shoot flames out of your handlebars, and more.

The kit is manufactured by Canadian company K-Trak and converts any existing 26-inch hardtail or full-suspension mountain bike into a snow bike, Richard Tyler of Bike Radar reports.

A single ski replaces the front wheel, while a specially designed rear wheel and rubber track setup enables the rider to retain use of their gears and rear brake.

The system is apparently quite easy to fit onto a bike and use, and it can help those who are biking downhill in the snow do so more gracefully. However, it is a little bit of a chore to use on flat land.

Overall, Yannick Read of Britain’s Environmental Transport Association (ETA) said, “If you can ride a bike, you can ride this straight away.”

The B.O.N.D. (Built of Notorious Deterrents) bike also includes a flamethrower for the handlebars — no joke! That seems a little excessive (but also super cool).

Why does it include a flamethrower?

Because the bike kit was created in response to a survey done by ETA, which offers insurance to bicyclists and was trying to identify ways of improving their cycling experience, and the most common complaint of cyclists was cars and trucks passing them too closely. Here’s one solution to take care of that.

This bike also comes with an ejector seat, an anti-theft feature. The eject button is on the handlebars, but it is not clear, from what I have read, why a thief might want to press the button — it must say something enticing. (I don’t think the ejection seat looks strong enough to actually eject a rider either, but maybe I’m wrong.)

Unfortunately, the bike is not actually for sale and may never be (though, perhaps it will inspire someone to create a similar commercial version one day, or some DIY versions.)

“Wannabe James Bonds will be disappointed to hear that we have no plans to sell the B.O.N.D Bike, but it shouldn’t be necessary for cyclists to resort to flame throwers to get a little consideration on the roads,” an ETA representative stated. “Correct road positioning and an assertive riding style can dramatically reduce cars and lorries passing too close.” Hmm, maybe, but this bike sounds like more fun.